War Memorial Bus shelter - "He who would valiant be".

Cllr Nick Ireland has successfully registered the thatched village bus shelter opposite the pub as a building of historical interest; it was built by the parents of David Edward Parry-Jones who fought in World war II and is therefore now classified as a war memorial. 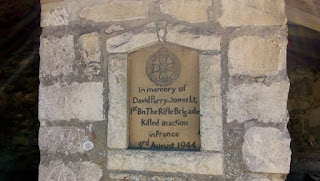 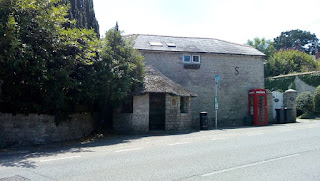 The Parry-Jones family lived at Greensleaves on Church lane in the late 1930s to 50's and later moved to 62 Preston Road in Preston.

David Parry- Jones was their only son and was survived by his elder sister Daphne.

He fought in WW2 as a Lieutenant in the 1st battalion Rifle brigade and died near Caen on 3 August 1944.


David was killed during the battle that ensued after the Normandy landings. There was intense fighting in Normandy itself and during the advance to the River Seine throughout August.

"When war was declared in September 1939 the 1st Bn. was part of 1st Support Group, 1st Armoured Division, stationed at Tidworth Barracks, London. During the Fall of France in 1940, it served as part of 30th Brigade in the defense of Calais, along with 2nd Bn.  King's Royal Rifle Corps and 1st Bn. Queen Victoria Rifles, having originally gone to France as part of the 1st Armoured Division. In the battle of Calais all three of these battalions were lost, but not before they have held up a large German armoured force trying to get to the BEF at Dunkirk, for three important days. After the Fall of France the Battalion was reformed and then sailed to North Africa with 1st Armoured Division. It joined 22nd Armoured Brigade as part of 7th Armoured Division for El Alamein and continued to serve with the Brigade and Division until the end of the war. After the surrender of Hamburg in May 1945, the Battalion they passed through it and onto to Kiel where they were for V.E. day. There they found that the peninsular was "wall to wall" with men and equipment withdrawn or retreated from the Eastern Front, who had escaped from the Russians. Unlike the other Rifle Brigade Battalions instead of the usual A, B C and S (Support) Companies, 1st Bn The Rifle Brigade consisted of A, C, I and S (Support) Companies". Source: http://www.desertrats.org.uk/orginfantry.htm#RB

David was originally buried in a small churchyard at Coulvain but was moved to the military burial ground at Bayeux on 13 August 1946. 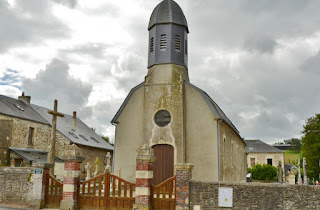 Coulvain church
BAYEUX WAR CEMETERY, which was completed in 1952, contains 4,144 Commonwealth burials of the Second World War, 338 of them unidentified. There are also over 500 war graves of other nationalities, the majority German. The BAYEUX MEMORIAL stands opposite the cemetery and bears the names of more than 1,800 men of the Commonwealth land forces who died in the early stages of the campaign and have no known grave.
David Parry-Jones does have a grave with a headstone the inscription of which is as follows: 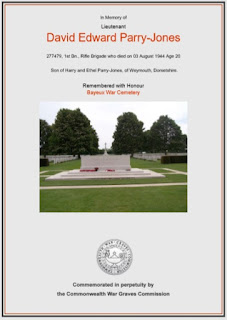 
"But it is surely invidious to dwell upon individual efforts when all did their utmost. Of those who died, although the deeds of some are not yet known in full, it would be impossible to write too much. They will be remembered. Of those who survived a great number were wounded, most of whom had to recover as best they could in German hands. If all ranks of the 1st Battalion who had reached by keenness and hard work such a high standard of training for mobile warfare with armoured divisions, were disappointed of their fun in a war of movement, they at least still enjoyed the excitements of the early stages of this action and in the grim discipline and fighting qualities as Riflemen under any conditions of war, took pride in them. It would not be easy to find any who regret the days of CALAIS".

Parry-Jones family
David's father was Harry Parry-Jones a local dentist who had a surgery at 6 Frederick place in Weymouth. This building is now a restaurant next door to Howley’s toy shop.
He was also a WW2 ARP warden for Weymouth.
David's mother was Ethelle Blanchard Fry; she grew up in a military family as her father, Edward David Fry was a career soldier also in the Rifle brigade and reached the rank of Sergeant. He fought with distinction surviving the great war and later worked as a Commissioner for the army pension scheme. Ethelle was born in Kilkenny in Ireland but was widely travelled as her brothers were born in Sri Lanka.
Ethelle died in 1959 and her ashes are interned at St Andrews church in Preston.

In 1943 Daphne married George Wheeler in Scarborough. He was a Canadian studying theology at Toronto University (presumably one of those stationed nearby for D Day). They married in Scarborough UK in April 1943 and moved to Scarborough Ontario.
Daphne and George and had two children William Wheeler in December 1943 (born in Exeter) and Parry Jones Wheeler in 1945 (born in Ontario). They travelled back to Southampton from Canada on the steam ship Aquitania owned by Cunard in April 1947 listing Greensleaves in Weymouth as their intended address.
In November 1947 she sailed back to Canada via New York with the children on the Mauretania.

Daphne adopted Canadian citizenship and settled in Scarborough Ontario as a librarian where her husband George became a local clergyman and her son William a teacher. The family regularly travelled between Weymouth and Canada until the early 1960s.

They paid a local lady to maintain and clean the bus shelter.