White Horse Restoration Project - The history of how it was achieved

Historical context: Weymouth was a popular holiday destination for George III and his court, and it has been said that Weymouth was the centre of the Empire during the frequent periods when the King was in residence. He purchased property in Weymouth, and enjoyed the sea-bathing and attending the ‘Little Theatre Royal’. He also loved the local countryside and would ride his favourite charger Adonis across the Ridgeway to visit friends.

In 1808 John Rainier (brother of Admiral Peter Rainier), James Hamilton (a local stonemason/architect), John Wood (a local bookseller), and local landowner Robert Wood decided to honour the King by creating a figure on the hillside depicting the King riding Adonis. Sadly, due to illness, the King was unable to return to Weymouth and therefore did not see this tribute by his loyal subjects.


The ravages of 200 years: The integrity of this monument, which is 85 metres long and nearly 100 metres high, had been steadily deteriorating despite attention over the years by volunteer groups. Its outline had become increasingly ill-defined due to encroachment by plants, ad hoc unauthorised adjustments, and 160 tonnes of limestone scalpings that were mistakenly put on to the figure in 1989.

More Hard Work: Over the Summer of 2011, villagers, army cadets, school pupils, scouts, a local youth adventure centre, the navy, and coastal rangers were all engaged in cutting the newly marked outline into the hillside. On sunny days it was back breaking work in a beautiful setting, but on wet and miserable days it was extremely challenging on the steep and slippery slope. However, the enthusiasm and good spirits of the volunteers was always present, no doubt spurred on by the re-emerging form of George III. 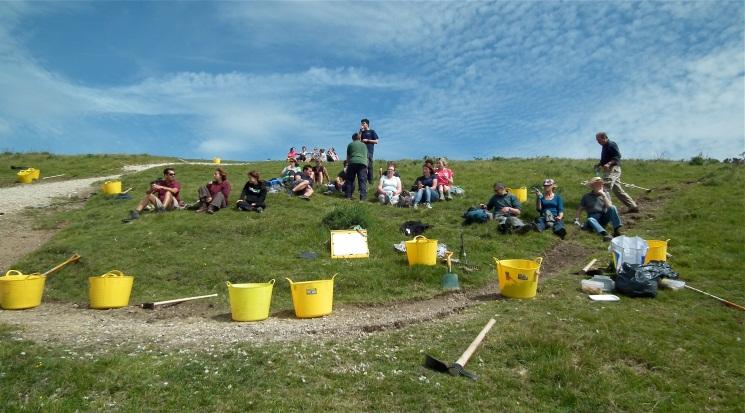 Ground Breaking Research: During the first half of 2011, further extensive research of the monument’s original outline was carried out using a wide range of disparate evidence.  This ranged from an analysis of oil paintings from the period, a variety of old photographs and Ordnance Survey maps dating back to 1883, and an extensive on-site analysis of earthworks using the latest GPS and mapping technologies. This was believed to be the first time that such a combination of evidence had been used in this way. 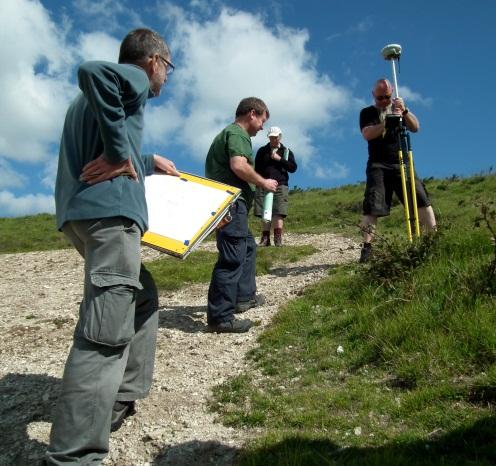 The considerable challenge: This project posed significant physical, financial and intellectual challenges due to the steepness of the site, the need to remove an exceptionally large amount of material and the paucity of records regarding the monument’s origins. The monument is also in the middle of a SSSI, which placed major restrictions on the movement of materials. There was also no obvious source of funding, with Lottery support being unavailable because this ancient monument is on private land.

Resources: ‘Seed’ funding was eventually received from Natural England’s Higher Level Stewardship Scheme, but it was clear that the project depended heavily on the availability of local volunteer labour and relevant expertise from various sources. This included an essential contribution by the Dorset Coastal Rangers Service, and the landowner’s active participation at every stage of the project. 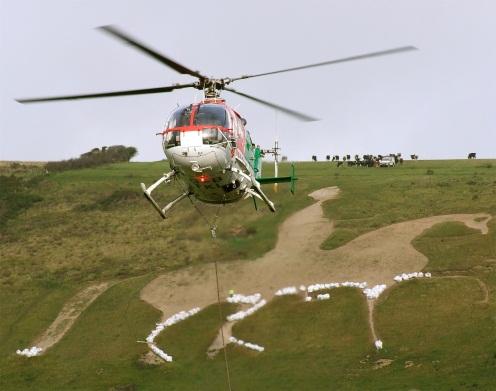 Initial research and First Steps: Following extensive research during 2009, 160 tonnes of inappropriate limestone scalpings were removed off the monument during 2010. This was achieved with help from the local community and businesses and by volunteers from a local Royal Engineers Training Unit, Dorset Army Cadets and a RN Sea King helicopter, along with contracted helicopter and ground removal services.

Oxford Archaeology were then consulted about identifying the original monument outline, but it was realised that further expertise was needed. Consequently, Ordnance Survey and the English Heritage Archaeological Survey & Investigation team were asked if they would work with the Restoration Group to help identify and mark out the original outline.

Marking out: Following an on-site evaluation, the original monument outline was marked out in yellow eco-friendly paint. In parts, this new outline differed significantly from the familiar weather beaten and eroded figure. Once again it was time to call on the community volunteers to translate those yellow lines into an accurate monument outline of which we could all be proud.
A Royal Celebration: We know that George III did not see this tribute to him. However, on 12th March 2012, albeit 204 years later, Her Royal Highness The Princess Royal celebrated this 1808 tribute to her ancestor, and also the painstaking restoration to its original form by today’s volunteers. Truly a memorable event that was much appreciated by all who had contributed so much of their time and energy to this restoration.

A legacy for future generations: This White Horse is unique amongst its kind across the UK because of its rider, and it evoked enormous pride when its image was beamed around the world in the background to the Sailing Olympics. We can be rightly proud of that and should encourage others to enjoy its spectacle and its story. To this end an off-road Viewing Point, enabling visitors to Dorset to admire the monument and learn about its fascinating history, has been constructed on the hill opposite. The monument’s original outline is also now officially recorded for posterity by Ordnance Survey.

On reflection: The seed funding by Natural England opened the door to a pool of community good will and enthusiasm that was crucial for success. Since that early beginning, the journey was eventful and inspirational, with many highs and lows along the way. Hard work and an unswerving focus on remaining true to the original form, lay at the very core of the project’s success. Involving the wider community was always important throughout, with a continuous flow of colourful and perceptive reports and photographs of progress appearing on a dedicated website www.osmingtonwhitehorse.info. An action excerpt can also be seen on this link:

Slope on the hill:
Often steeper than 1 in 2
Superfluous stone removed off the monument:
160 Tonnes of limestone scalpings

Helicopter loads of stone removed:
Over 350 round trips, each of approximately 4 minutes.

Technologies involved:
US &amp; Russian GPS plus UK mobile telephony systems. Providing a
combined accuracy to within 3 cms of the identified original outline.

Construction of new revetments:
Oak edge frame, and Softwood inside frames (to rot away)

Notional value of volunteers time donated:
In excess of £142,250